Fixed Gear bicycles (a.k.a. fixies) are getting more and more popular. They’re already part of the daily streetscape of Amsterdam and gaining ground in the rest of the world. For those who’ve not yet heard about this type of bike: Fixed Gear bicycles have no freewheel, meaning –as the name kind of reveals- that you cannot change gear. Also, the bike is brakeless. When it’s moving, the pedals will be in motion as well…

Why do people ride those bikes, you might wonder. A legitimate question. Especially in the crowded streets of Amsterdam it can actually be a life threatening way of transportation. Fixed gears are originally designed for track cycling in a velodrome. Without breaks and gears, the bike is low-weight and therefore it’s easy to accelerate and maintain high speed. From the tracks it has found its way to bike messengers, who also use their Fixed Gear in the famous alleycat races. Because of its appealing and sporty look, Fixed Gear has become the transport of choice of fashionable hipsters nowadays, even despite their lack of brakes.

Border City Bikes
Designer Josha Roymans is smartly responding to the spreading Fixed Gear movement and has started Border City Bikes, a brand new brand for custom bicycle parts. He has designed a wooden handlebar, handmade (and therefore unique) of ecological Dutch wood from gardeners and foresting. This environmentally friendly bar comes in three types: one made of yew, one made of oak and one made of robinia. All of them are finished with ecological oil. Before the release on December 1st at Bike shop Pristine Fixed Gear they were already selling like hot cakes. 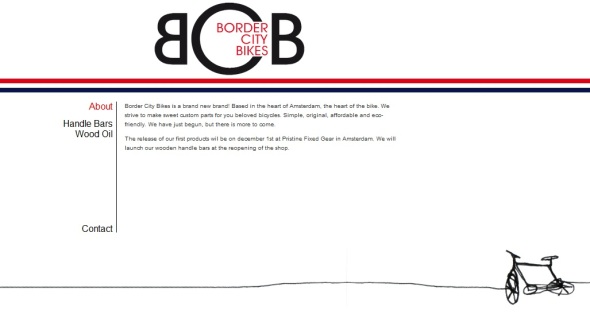 While strolling along the Amsterdam canals it becomes clear: bikes, and fixies in particular, are no longer only a matter of transportation. Bikes, rather than cars, have grown out to be the urban status symbol. In the city, it’s all about bikes now.

This entry was posted on December 10, 2011 by amsterdamcyclechic. It was filed under Bicycle accessories, Dutch Cycling Trends, Racing bikes and fixies and was tagged with Fixed gear, Fixies, wooden handlebars.