Jonathan is an Amsterdam based designer from the UK with a passion for all things retro. He loves working with his hands to make his creative visions come to life – whether it’s designing shoes for international fashion brands, reconstructing vintage furniture or working on his collection of vintage bicycles. 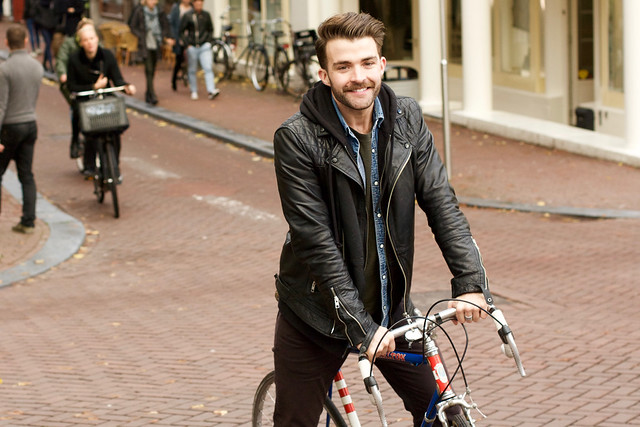 Welcome, Jonathan! We’re glad to have you as our December cyclist of the month! To get started, tell us a bit more about how you ended up in Amsterdam.
I’m originally from the UK, more precisely from where Hobbits live. Yes, that’s right. Lord of the Rings was actually written in my hometown. After visiting Amsterdam for a long weekend, I fell in love with the city! One month later, I found myself moving over. That was about two years ago… and here we are now, enjoying a crisp, cool day in the lovely Nine Streets neighborhood.

As an expat, what was your first reaction to the Dutch cyclists here in Amsterdam?
At first, it was all so unique and quite startling!Now, cycling has become a major part of my day-to-day routine here in Amsterdam. The Dutch are known as the kings of cycling but it was a totally new concept for me after living in London for 10 years. Unfortunately, in London there’s a lack of forward thinking towards cyclists which makes it quite unsafe. 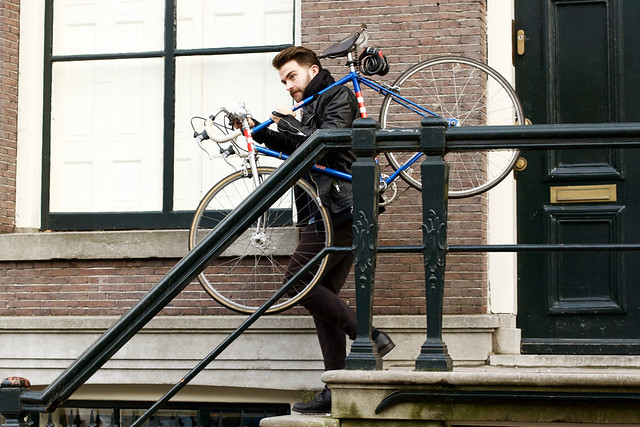 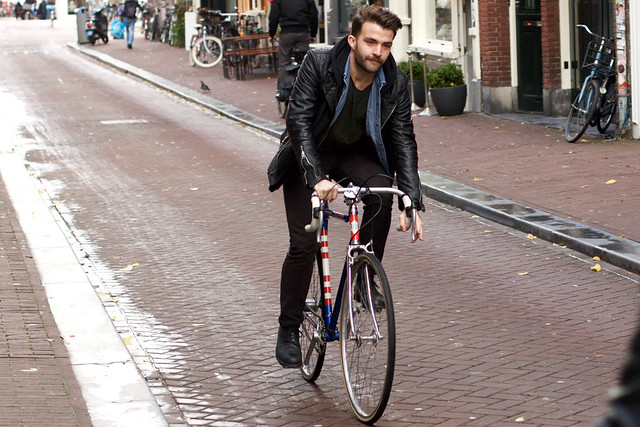 In your opinion, what makes Amsterdam so special for cycling?
Now that I have adapted to life-on-bike, I absolutely love it! Cycling around the Jordan with friends is one of my favorite areas because of course, the scenery is lovely. Plus, it is more peaceful and less crowded than the rest of the city center. Riding my bike has become a bigger part of my life. Cycling in Amsterdam really inspired me to start buying vintage bikes and do them up, which is now one of my favorite hobbies. 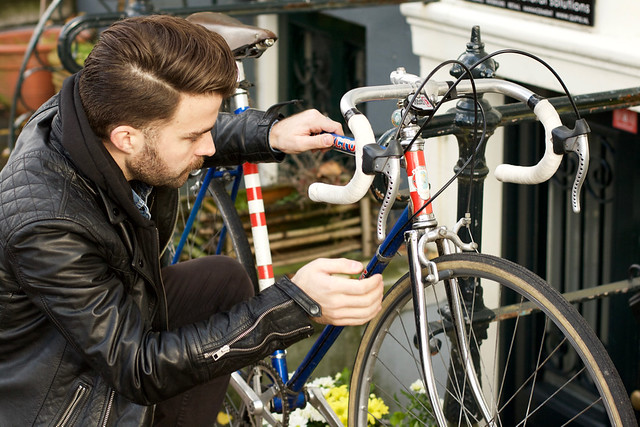 How did you get into collecting vintage bikes?
I love the hands on process of fixing up vintage bikes. Plus, of course the bike loving vibe of Amsterdam is an inspiration. A few years ago, I bought a bike black, vintage Peugeot. It was from 1975 in like-new condition, just beautiful! Once I got my first vintage bike there was no looking back, I was in love! Now, I’m a vintage bike enthusiast. At one point, I did have seven vintage bikes so, perhaps you could call me a “collectomaniac”? At the moment I am down to only three, including the Carlton pictured here.

My other prized bike is a 1982 Peugeot Centennial Edition PH12, this was one of the first bike to consider aerodynamics, it has only been ridden twice since 1982! At the moment, it’s hanging on the wall of my apartment. My third bike is a Peugeot that my dad bought brand new in 1975, when he was 13. 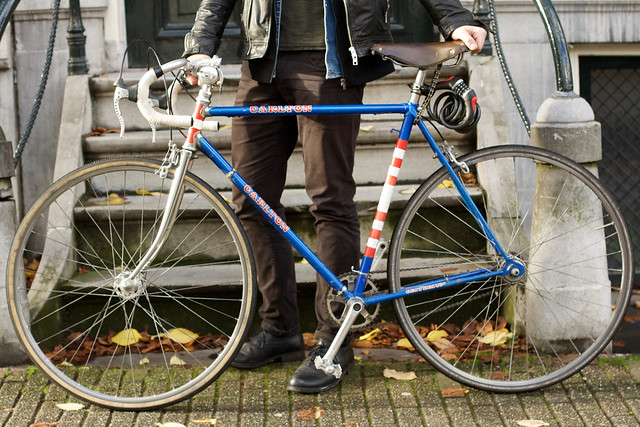 What’s the story behind the unique, vintage Carlton that you’re riding around the Nine Streets today?
The one pictured here is a Carlton criterium custom which I built myself after bringing it over from the UK.The bike was owned by a family friend who bought it new. He was a long distance rider so, I have had it the bike has undergone some changes and I still want to change it further and make it into a single speed.

This is the first bike I built myself and added a Basil bell and Brooks seat. I’m very proud of it!

Carlton is up there as one of my favourite brands. My dream is to one day I have a Bianchi Pista too, they’re absolutely beautiful. So far, I have yet to find one the is in good enough condition… Hopefully some day! 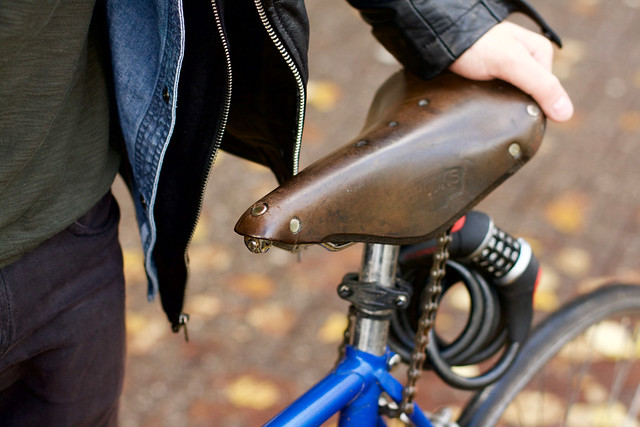 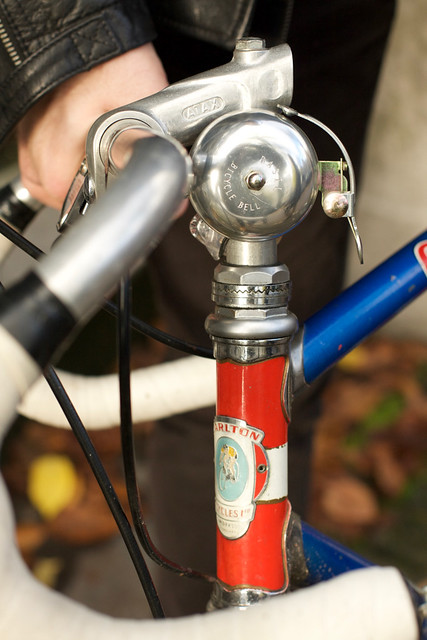 What’s your favorite aspect about cycling in Amsterdam?
My favorite aspects of cycling in Amsterdam are the people you run into along the way. When biking around town, I often spot a friend cycling by and we wave or shout, ‘Hello!’ You often see the most random scenes pop up out of the blue. It’s fun to capture a quick snapshot of wacky moments on my phone and share them with friends for a laugh. I get so much enjoyment from riding my bike everyday in this wonderful city. Thank you, Amsterdam! 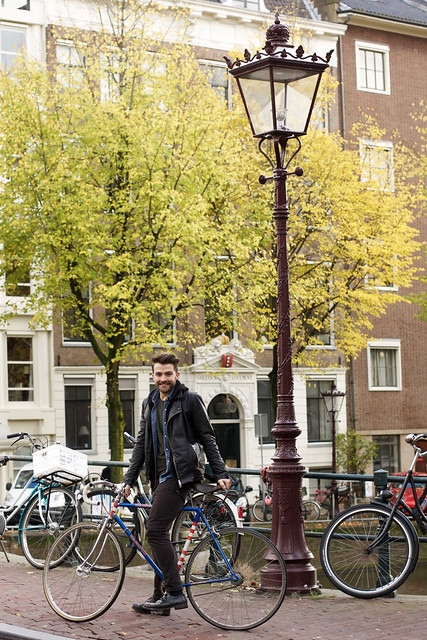 And a big thanks to you Jonathan for joining us here at Amsterdam Cycle Chic! You can follow along with his vintage bike adventures via Instagram. ‘Til next time…

This entry was posted on December 1, 2016 by lilymargaret. It was filed under Bicycle accessories, Dutch bikes, Fashion on bikes, Man on bike, Neighborhood cycling, Racing bikes and fixies, Vintage culture and was tagged with Amsterdam, negenstraatjes.