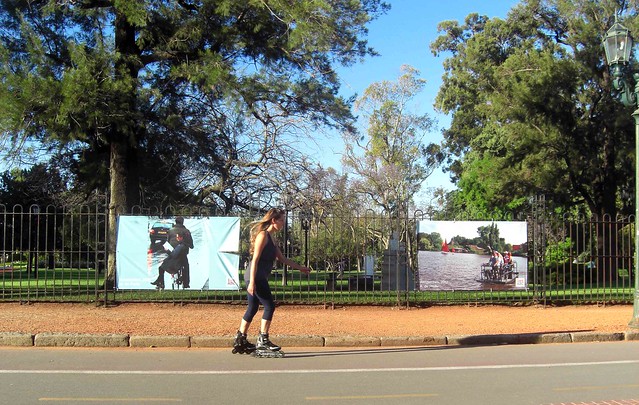 Remember Else’s project I bike ABC in Buenos Aires? Well this is the result: our pictures printed in huge and hanging in the ‘El Rosedal’ park of BA..

Copenhagen Cycle Chic is also part of the exhibition with some nice pictures:

And of course, the Queen of the Netherlands the Argentinian Maxima:

In September 2012 our Cycle Chic team member Else moved (temporarily) from Amsterdam to Buenos Aires. She has been living here for about four months and already succeeded to set up Buenos Aires Cycle Chic, so we really believe she deserves to be crowned as our Cyclist of the Month!

WHY DID YOU MOVE TO BUENOS AIRES?

After I finished my studies it was a good time to flee the country for a while, not having a permanent job and all. Besides, like so many others, I wanted to experience living in another environment with a different culture, learning a new language, and all that.Although I never visited before, Argentina seemed like the perfect place. It’s a country with a very interesting past and present, beautiful and very diverse nature, lots of sunshine, wine and steaks. And hearing many good stories about Buenos Aires – most of them true – made the choice pretty easy. The ocean separating it from the Netherlands is also a plus.

WHAT ARE YOU DOING IN BA?

Of course I’m learning Spanish. I also write a little about art and culture – not in Spanish – for a magazine/paper. Besides that I’m  organizing a bicycle event with the Netherlands Institute Buenos Aires (NIBA). This institute aims at establishing cultural and scientific exchange between the Netherlands and Argentina. The bicycle event is called Holanda en Bici and will take place in April. There will be an exhibition in the public space, a big bicycle tour and expert meetings about various subjects, like urban planning and infrastructure. The aim is not only to portray the Dutch bicycle culture, but also to hitch in to the current interest and development of the bicycle culture in Buenos Aires and contribute to it.

YOU HAVE STARTED BACC, CONGRATULATIONS WITH THIS. CAN YOU TELL US HOW THIS ALL HAPPENEND?

As I was part of the Amsterdam Cycle Chic-team, it seemed like an obvious choice to continue my involvement with cycling in Buenos Aires. As a Cycle Chic blog promotes the daily use of the bicycle and, at the same time, portrays a city’s cycling culture, it would really add something to the scene here. Besides that it’s just a lot of fun. That’s why I started it and am now blogging with several others (Dutch and Argentinean).

HOW IS LIFE ON 2 WHEELS IN BA?

It’s a bit of a jungle out here. The city is not very bicycle friendly. You have some bicycle lanes, but most of them are narrow and curved. Though you are relieved whenever you encounter one; zigzagging past cars, taxis, buses, motors, etc. can be pretty intense. But besides that, the city is working hard on becoming more bicycle-friendly and getting people to cycle. There is a very colorful and lively bicycle scene. Plus, the city’s landscape is ideal for cycling, and eventhough it might cause you several heart attacks, there’s nothing better than cruising through Buenos Aires on two wheels.

WHAT DO YOU WANT TO BE ACCOMPLISHED BEFORE COMING BACK TO AMSTERDAM?

I hope Buenos Aires Cycle Chic is fully up and running with a lot of followers and ‘likes’ on our Facebook page, and an enthusiastic team who will continue blogging.

AND LAST BUT NOT LEAST, WHAT IS YOUR BIKE LIKE?!

It’s a second hand bicycle, which I bought through Mercado Libre, the Argentinean e-bay. It’s a bit rusty and unstable, but I already got attached to it. As I will not be here forever, it’s perfect for the time being.

Thank you Else for this interview and those nice pictures.

We look forward to seeing you soon in Amsterdam!

Aude, on behalf of the ACC team