We all love our pets and hate leaving them at home. In Amsterdam, being a dog is pretty cool. You get walked while your master rides next to you (finally those humans can keep up the pace!) or you can choose to sit and ride in style! This little ball of happiness was riding through the canals in his crate with a big smile, the wind in his face and just watching the world pass by. 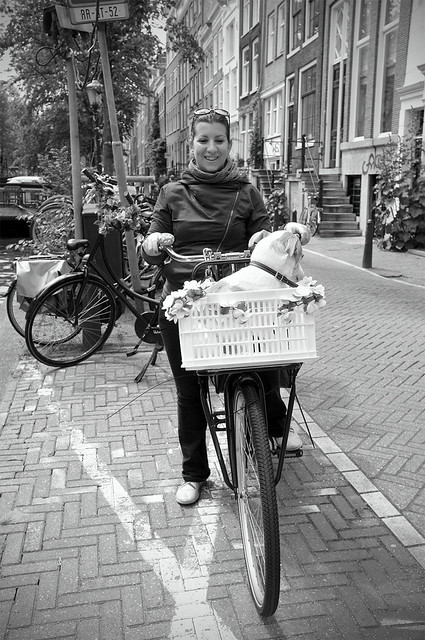 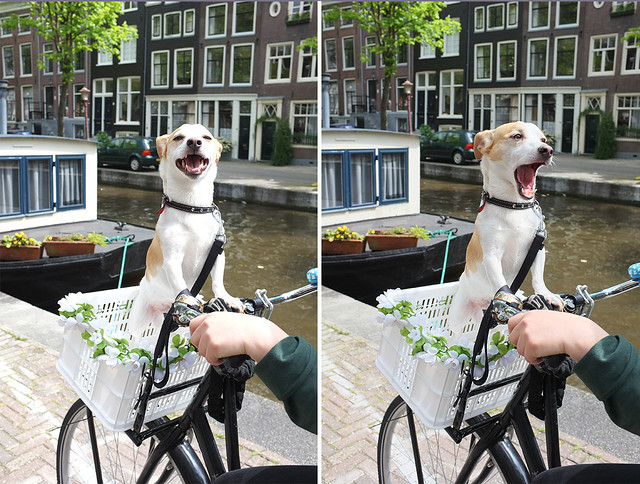 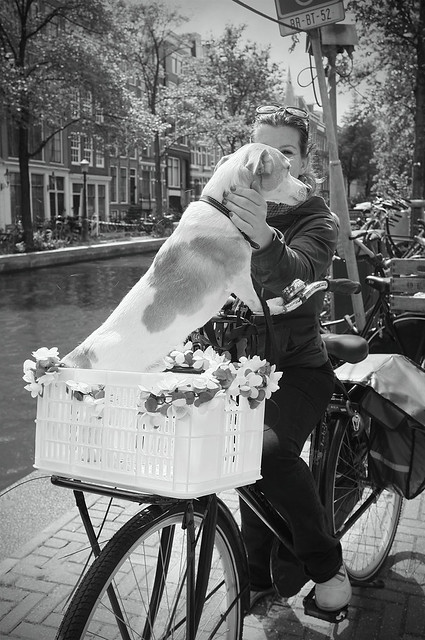 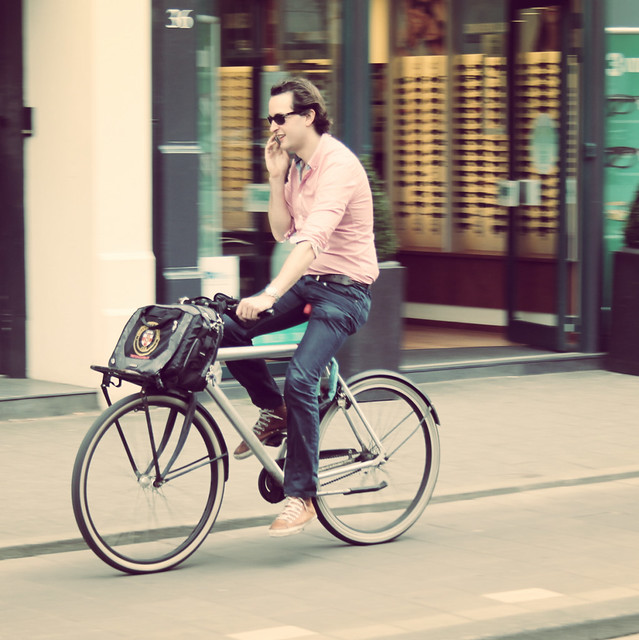 A day for yellow pants

We are having some lucky sunny weather so far this fall. Two days in a row of lovely sun and blue skies. And more to come this week, right? Maybe I need to find some yellow pants to celebrate….

Ten minutes in an Amsterdam window

Let me invite you to Amsterdam, to have a look out of my window. Every minute at least one chic cyclist is passing by. Having a Cycle Chic blog in Amsterdam is therefore not too difficult, almost any cyclist is a chic cyclist.

Please enjoy, ten minutes hanging out of an Amsterdam window:

3rd minute: Checking out the neighbours

7th minute: Taking your bike for a walk

9th minute: Too cool for school

Hope you enjoyed your ten minutes in Amsterdam. Don’t you love the cyclists, the sun and the cyclists’ shadows on the pavement? Please come again soon!

Imagine: you are with two people, you have one bike, and you want to go to a friend’s birthday party. What would you do? You could of course leave the bike and go walking, go by car or take a tram. But you can also be inspired by these Amsterdammers and go together on one bike.

We show you five different ways to share a bike (also called doubling). No special seats or cargo bikes needed!

1. Sit on the back carrier (one leg at each side).

Sitting on the back carrier is the most common way to cycle together. Men normally sit with one leg at each side

2. Sit on the back carrier (two legs to the same side)

3. Sit on the front carrier

A very popular way amongst Amsterdams youth. (Don’t try this with a heavy person).

4. Stand on the rear carrier

For a good view. Like this son on the back of his fathers bike.

Not a very clear picture. They went too fast and I don’t see this way very often. We actually do not know why you would do this. Maybe when the person cycling doesn’t smell too good, or you prefer looking at the streets instead of looking at a back?

There are a lot of other ways to cycle together on one bike (sit on the crossbar, on the handlebars, or on the saddle). Take a look at more pics in this Cycle Chic Republic post.

Now, after being inspired by these cyclists from Amsterdam would you take a bike together?

Cycling with… Alexander and Ernst-Jan

As some readers know, the ‘Cycling With…’ team has recently shot some cycling videos in Amsterdam. Our very own Meredith was already featured on their blog.

Now they have released a new bicycle interview, with Alexander Klopping (a tech freak and gadget expert, known from the popular tv show ‘De Wereld Draait Door‘) and Ernst-Jan Pfauth (a Dutch journalist and blogger, known best for his columns on technology in nrc.next).

We encourage you to join Alexander and Ernst Jan on their Sunday cycle through Amsterdam, to see how they met via Twitter, to hear them argue about the demise (or not) of traditional journalism, and to learn some cool Dutch cycling tricks.

Cycling with Alexander & Ernst Jan from Paddy Cahill on Vimeo.

The mission of ‘Cycling With…’
“Today’s cities face big problems: polluted air, obese citizens, and social exclusion. Luckily, there’s a simple solution: the bicycle. ‘Cycling With…’ believes that by sharing stories of inspiring people on bikes, we can encourage cities to take pro-cycling action. So we have embarked on a mission to film 100 ‘Cycling with… documentaries’. And to show the world how gloriously easy, fun and sexy a bike ride can be.”

If you want to help, please sign up for their newsletter now.

At Fa. Speijkervet, a recently opened restaurant in Amsterdam West, we meet Jerusa, who works there as a waitress. Living in the East of town, work is a little out of the way, but this cycling-loving lady enjoys the ride. Her firm and traditional bicycle makes it all the more pleasant. Besides, the ride is more than worth it: her brother is chef de cuisine and the menu makes your mouth water (Check out Speijkervet’s Facebook page). No wonder this place is already a settled hotspot.

Next to waitressing, Jerusa’s main objective is her music career. As a singer songwriter she describes her music as singer song pop meets indie pop. She has lived in New York and Nashville to write songs, gain experience and perform (and of course, used her bicycle to get from A to B). She is currently forming a band, writing her own material and is contracted with Dutch pop singer Ilse de Lange. Not too bad (check out her twitter with a link to her music channel). And oh yes, she’s also busy studying for a bachelor’s degree in Psychology. Needless to say this pretty and talented girl puts the chic into cycle chic!