Anoma is a working mum and Creative Producer who landed in Amsterdam with her family after living in London and New York. When she isn’t exploring other corners of the globe, you can find her cycling around the city, often with her two silly, adorable kids in tow.  I met up with all three of them along the canals to chat about raising a family in our bike-friendly city. 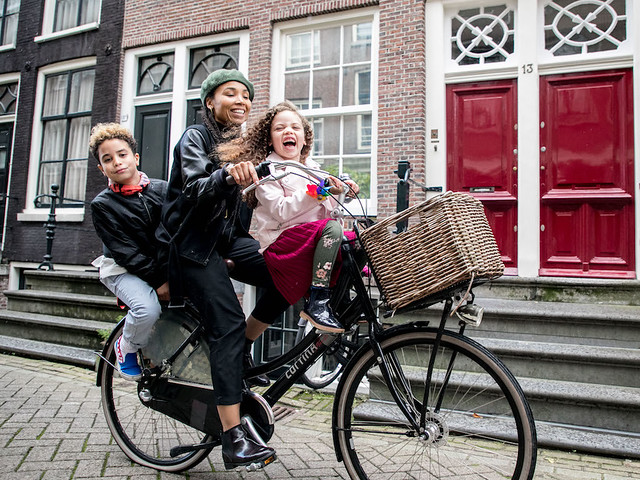 How did you and your family end up Amsterdam? We’ve been here for nearly three years now and time has flown by in such a good way! We have hosted so many of our friends and family from around the world, introducing a lot of them to Amsterdam. My husband, Damian’s work brought us over for a period of time and then we decided to stay for a bit longer. We lived in Brooklyn, NY for many years before this chapter and have a deep-rooted love for New York. Amsterdam has been a healthy and fun place to live.I’m a nature loving city women, so Amsterdam is a great place to live in and raise a family. I don’t compare the cities, as we live different chapters of our lives in different places. 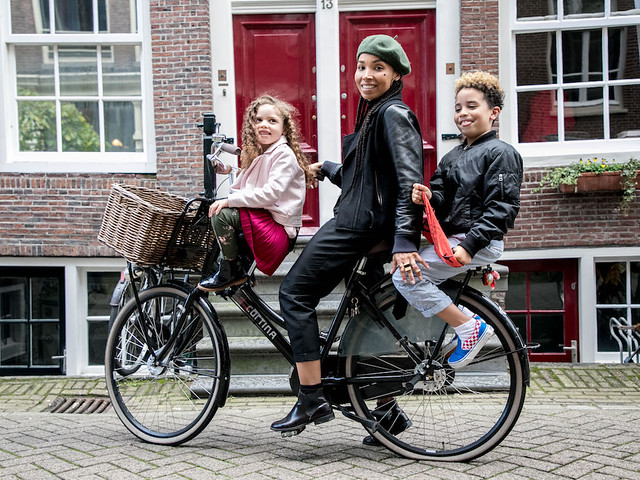 Tell us a bit about your family and how you make the most of Amsterdam’s bike-friendly lifestyle. We love cycling together here! They love it less when it’s raining. Sometimes, we drive and Damian has a motorbike, but my go-to choice is always to cycle first. We never got a bakfiets because I like to take up as least amount of space when moving.

Isa is five years old and she has just conquered learning to ride her own bike. It’s such a prideful moment for her and us! Etienne is eight years old and learned to ride a bicycle quite early on while we were living in Brooklyn. He has a BMX and he wants to do tricks all the time, he also loves skateboarding. The kids enjoy going to the skate park on Olympiaplein. We also have a big dog named Lake, who wants to be out and about with us at all times, but she is a bit slow when running alongside the bike, and I like moving fast.

For us, the kids are a bit too young to cycle alone at this point, but it’s great to see so many children independently cycling to and from school. The bike rules the road and nearly all drivers drive with that in mind. 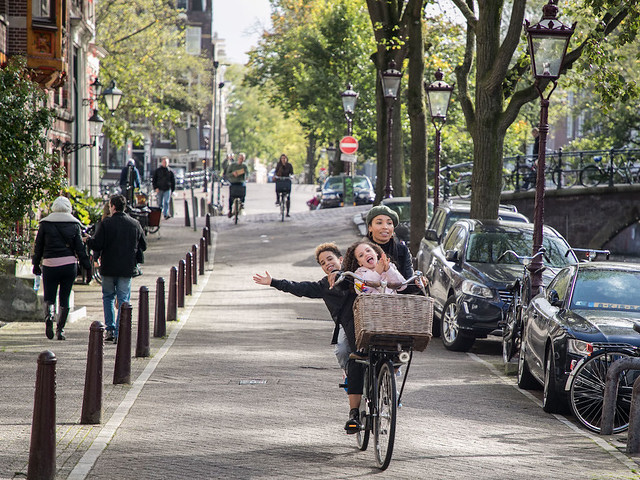 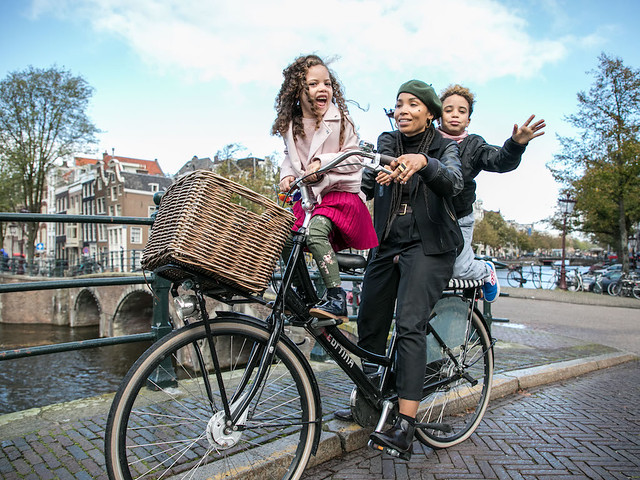 How does cycling fit into your daily commute as a working mom?
My life in Amsterdam involves the bike, rain or shine (or rain and rain!). I do most everything on my bike and ride super fast from place to place. In the morning, I head to meetings, yoga or my studio to get some computer time in before squeezing in another meeting. As a Creative Director, I share a studio space with a film director in the Jordaan, which is not only centrally located but also a wonderful bike ride! Of course, there are challenges such as trying to look presentable for a client meeting when it’s a 20-minute cycle and dumping down with rain. That can be a bummer, any day.

In the afternoons, I ride quickly to the grocer to grab food and usually end up getting way more than I actually can fit into the bike basket. Then, I head off to school to get the kids and we go park for more wheels and playtime and walk the dog. 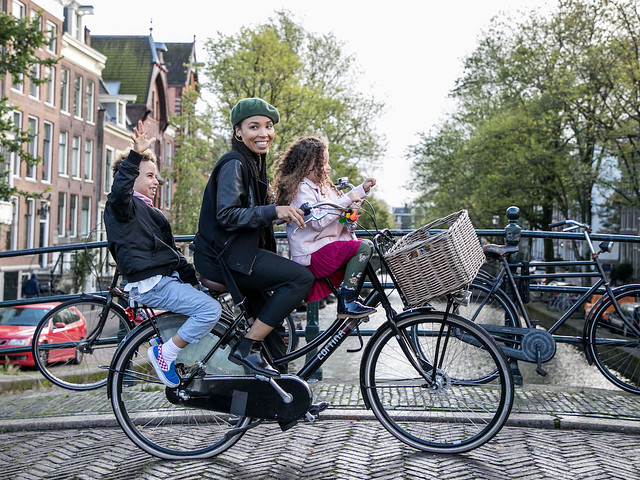 Do you have a favorite area to cycle through?
Anywhere at night, when the sky is clear, is stunning! I try to cycle through the Rijksmuseum tunnel as often as possible, as it’s magical! I don’t scream at the tourists, instead, I ding my loud, happy sounding bell, and say, “Look Up” nicely. 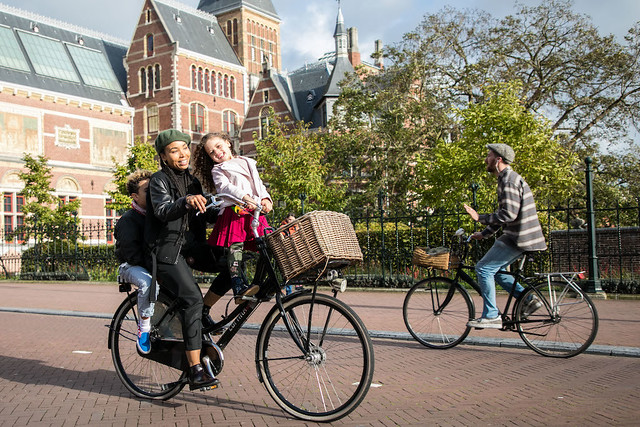 How does cycling contribute to your life?
There are moments when I am really grumpy or pissed off about something and then, after seven minutes of riding my bike, I start feeling absolutely happy and energized! Cycling allows me to shake off all the internal negativity, it’s that simple. 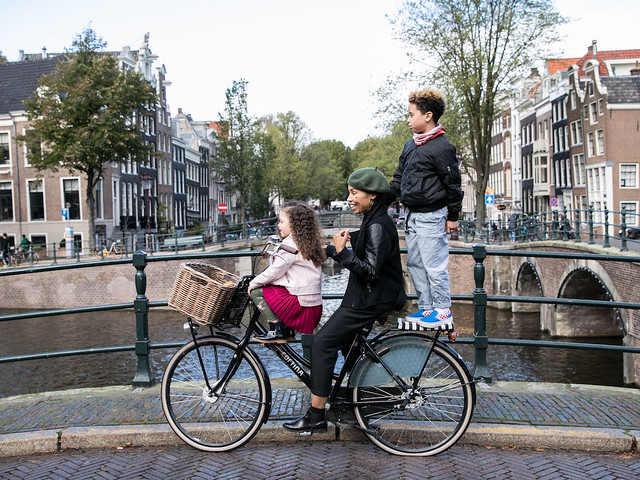 Interview and photography by Lily Heaton

This entry was posted on October 23, 2017 by lilymargaret. It was filed under Bikes and bridges, Child seats, Cycle Chic Spotlight, Cyclist of the month, Dutch bikes, Family cycling, Fashion on bikes, Together on a bike .