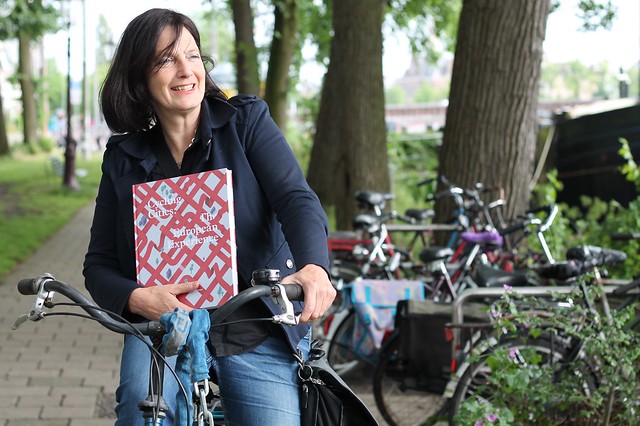 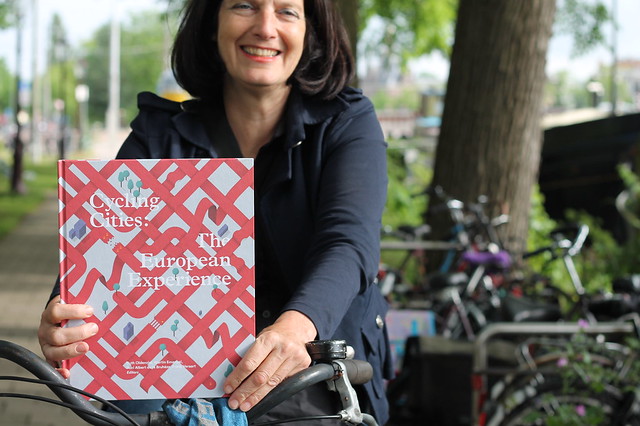 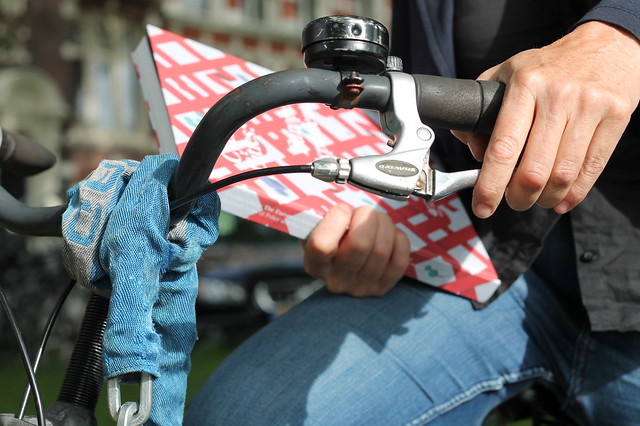 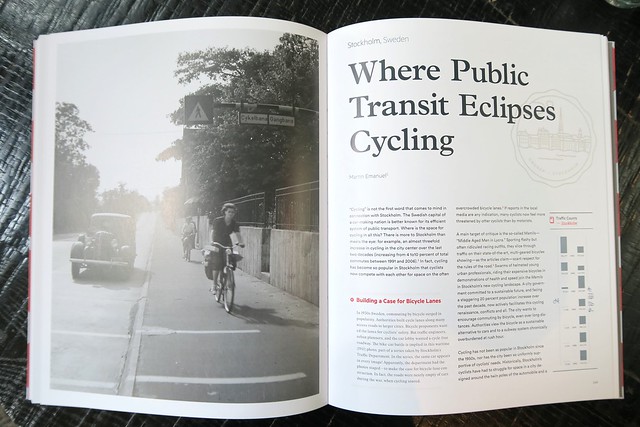 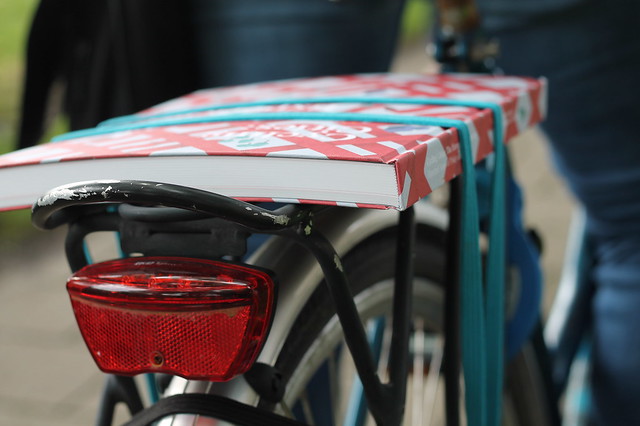 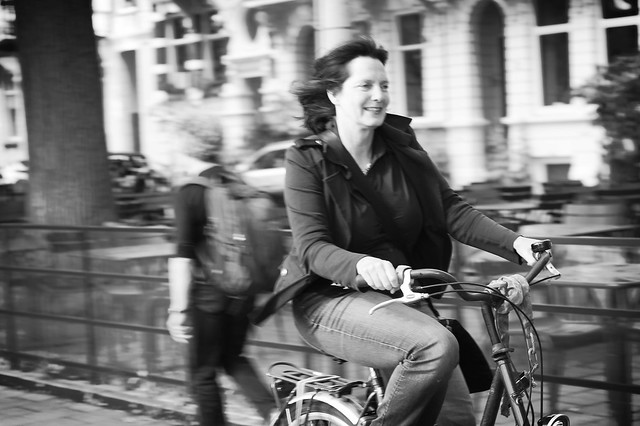 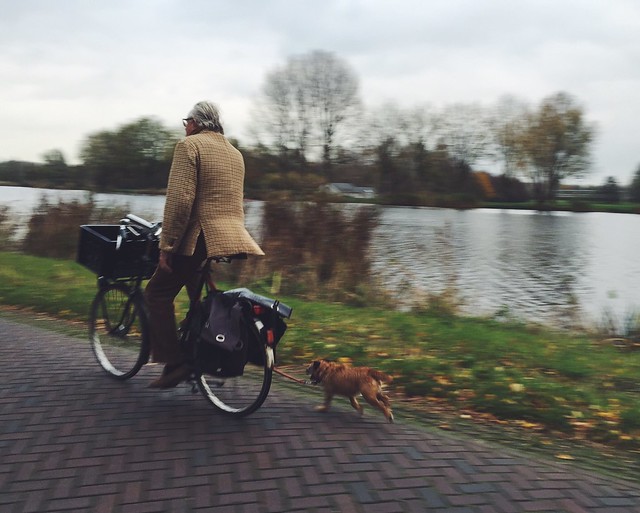 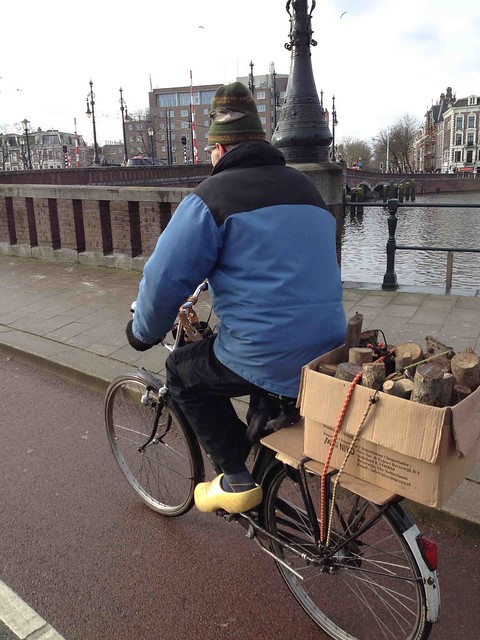 The title says it all, and for the ones that are too Dutch to get it: WOODEN SHOES! And wood on the bike luggage rack..looks like Dutch countryside in the middle of the city! 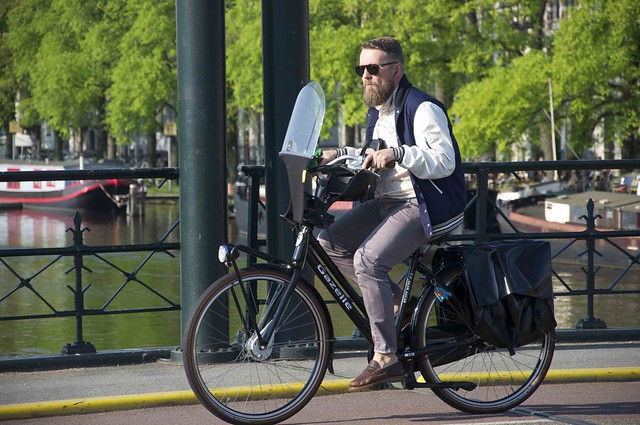 This is how a hipster looks like after getting a kid! Remaining cool while riding on a big ‘mamabike’!

Loving this chick’s style. Black on gray on white, with the black Nike Frees — on a classic black Omafiets. Plus the big bun on top. And Ray-Bans to make it stick. Nice. 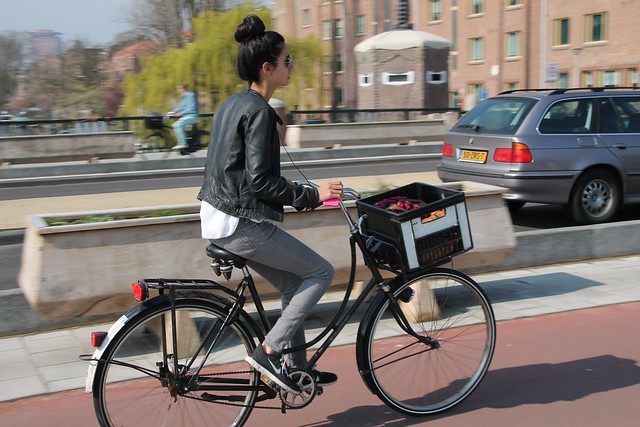 On gorgeous spring days like today, sometimes you just have to stop and enjoy the views of the Amstel, the sunshine…and the cute boys in the rowing boats! 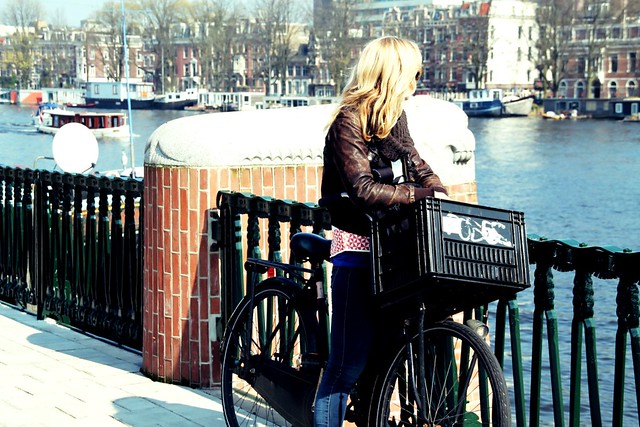 Please join me for a cycle on a sunny day in August along the river Amstel.

The artist and his bike: painting the view over the river. 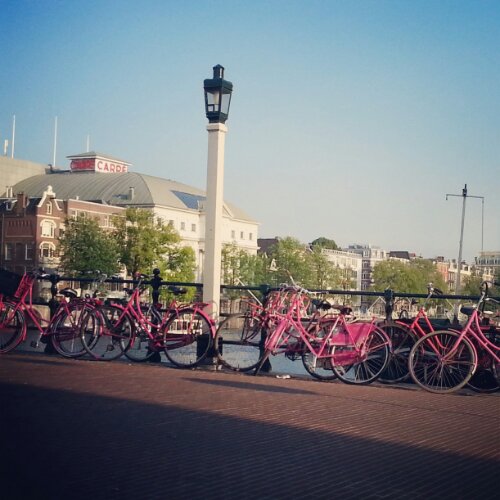 A typical sight for the end of August and the beginning of the new academic year; the new sorority girls all paint their bikes in the same colour. 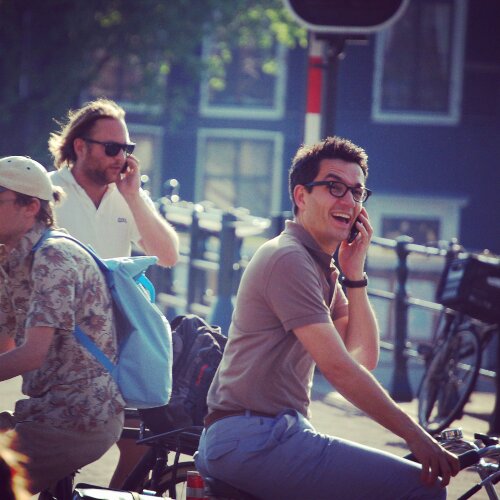 Just checking where their friends are so that they can join them for a beer on a sunny terrace.

Taking it easy on his way to work. Cycling with no hands and enjoying the view. 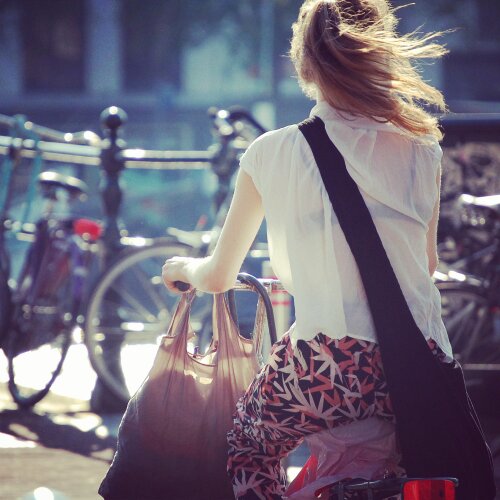 The sun on her back, the wind in her hair and the summer print on her trousers, that is August!

I just loved these blues-brother-like guys, appearing on the borders of the Amstel river. It made me wonder, though: are they just colleagues on their way to have a drink or is this a smart dressed entrepreneur, taking his client out for lunch to one of the nicer restaurants on the borders of the Amstel. In any case, you must have a good deal of self-confidence to sit on the front seat of a bike like this, because a clumsy fall of the bike in front of a fully occupied terrace does not really match with this cool image!

In one week we had many festivities in Amsterdam; on the 30th of April Queensday and the coronation of the new king; on the 4th of May the Remembrance of the Death at Dam square and on the 5th of May both Liberation Day and the championship celebrations of Amsterdam’s football club Ajax.

After all these celebrations, with many people in the streets from all over the world, we are now taking it easy. Just enjoying the city and reliving about all the beautiful festivities.

The Amstel river was full of boats. Not only on Queensday Amsterdammers love to go dancing and drinking on their boats. Also Liberation Day is a busy day for the river. Every year there is a concert on the river. King Willem-Alexander, Queen Máxima and former Queen Beatrix came to listen and many Amsterdammers joined them on their boats. Now rest has returned, this guy only saw one sightseeing boat when he crossed the famous skinny bridge.

On Queensday the Vondelpark is full of family fun. The park is turned into a big freemarket place. There are many activities for kids like face-painting, games and musical and theatrical performances. But also in the most famous park of Amsterdam, rest has returned. This guy is enjoying an easy cycle through the park.

Paddy and Philip from the blog Cycling with… went for a cycle with Job Cohen, former mayor of Amsterdam. On a sunny day, Job told them a lot about the history of Amsterdam, about living cities and about interesting things that happened during his time as mayor.

Job Cohen was Amsterdam’s mayor for more than 8 years, he was the first to wed a same sex couple and he was awarded with the title European Hero by Time Magazine.

So sit down and relax and let Job take you for a spin through the Westerpark, de grachtengordel (the old canals) and along the river Amstel…

Cycling with Job from Paddy Cahill on Vimeo.